Mary slides the cookie sheet out of the oven and sets it on the counter. “Are they done, do you think?” she queries, her brow furrowed.

I reach out and lightly touch the top of a biscuit. It gives slightly, but is firm. Normally, I’d think they were done. “I don’t know. They have barely browned at all.” I say with concern. “Let’s put them in for another two minutes, just in case.”

“Okay.” Mary says, and slides them back into the oven. She sets the timer, and then we look at each other with questioning eyes.

“Did you see they haven’t risen at all?” I say in a low, incredulous voice, like I’m sharing a deep, dark secret. “They’re the same thickness as when I cut them.” For a brief moment I feel a twinge of worry. Did I add the baking powder? I walk to the cupboard, open it and stare at the container. A vague memory stirs. Yes, I added the tablespoon of baking powder. My anxiety eases, and I feel pleasure that my brain retained that vague memory for me to refer to.

After two minutes, we pull them out. “They must be done” says Mary. I guess. We both take two biscuits, open them up, and I smother mine in butter and raspberry jam. Even though they are a supplement to the soup that’s for dinner, there is no reason to eat them plain. 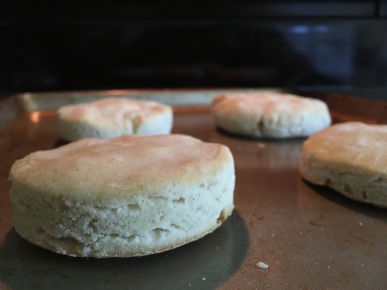 We settle on the couch and pause. It is the moment of truth. We both bite into our first gluten free biscuit and chew slowly, considering. “Tastes fine.” I say. Really, it tastes like our regular biscuits, more or less.

“Yes, it’s good” Mary agrees, and our dinner continues. A success, I suppose.

Welcome to our new gluten free world. Or, should I say, Mary’s gluten free world. I’m not really gluten free. Rather, I’m gluten free-ish because I cook and eat with Mary, and she has gone gluten free. These are our first gluten free biscuits. So much better than the gluten free pizza crust mix we used a few weeks ago. That thing was creepy – it puffed up beautifully, but tasted of absolutely nothing. It was like I was eating a hologram, there was such an absence of taste.

I’ve heard about eating gluten free for years, decades maybe. I’ve never considered it for myself. I mean, why go through the hassle? More recently, the social buzz says it’s part of an anti-inflammatory diet. Us brain injured types are suppose to try it. Like all anti-inflammation stuff (including my HBOT), it’s suppose to reduce swelling and allow my brain to function more successfully.

I’m not one to switch around what I’m eating. Or – let’s be honest – switch most anything, really. Eating is a basic part of life, and I figure I’m doing well if I eat a balanced diet of food made mostly from scratch. Easy peasey. Plus, I like to keep eating stress-free. I have no interest in assigning judgments to food products and, by extension, to myself based on what food I interact with on any given day.

But, in this case, gluten free came to my door and invited itself inside without my okay. So I might as well check out this visitor and see what I can learn. See if it is good for me.

We’ve been gluten free for about 3 weeks. Geez, has it only been 3 weeks? It seems like forever. But I checked my calendar – yes, it’s been about 3 weeks. Ack.

Is it helping? It seems to be helping Mary. Her digestion is working better than it has in months, perhaps years. She’s sleeping better. Since those are the things she wanted to fix, success is hers.

Me? I haven’t noticed any change. I probably eat some gluten, a piece of bread, either every day or every other day. My energy, sleep, mental cognition, and most everything else hasn’t changed. I might be getting one benefit, though. I’m in the process of eliminating omeprazole and have been wrestling with a rash of heartburn, acid reflux, excessive burping and other unpleasantness during this time. The last three weeks, my symptoms have decreased. Of course, I did pause my wean down about a month ago, so perhaps it’s just my body adjusting to less of the medication.

Can’t know. But it hasn’t hurt.

What else have I noticed about eating gluten free? Well, it’s not as satisfying. Not nearly. Probably some of that is because gluten free replacements have very little protein versus wheat. I feel vaguely hungry and dissatisfied most of the time. Yes, even right this minute, I am vaguely dissatisfied. I’ve gotten use to it, but it’s still there.

I’ve also learned that wheat has a taste, a distinct taste, and I like it. Wheat is tasty. Wheat is pleasant. And wheat has a hell of a lot of protein, which means you can have pasta for dinner and be satisfied. Not true in gluten free land.

I’ve also learned that gluten is everywhere. Who knew? Well, I didn’t. Soy sauce, for one, has wheat. So when Mary and I had some impromptu Chinese food last week, Mary had to eat some sad, slightly sauteed broccoli with bland chicken and plain rice with no sauce while I ate a truly excellent serving of General Tso’s Chicken. Yum!

Going forward? Mary and I are gluten free for the foreseeable future. After she’s settled back into work and life and is done with her recovery, maybe we’ll revisit it. Thanks to King Arthur’s measure-for-measure gluten free flour, I don’t have to sprint towards the finish line. Gluten free stuff can taste good. Only, it is still vaguely unsatisfying. Vaguely.

I am the writer of The Foggy Shore blog, with a professional background in Environmental Science. Right now, I'm working on a book about living and healing from post concussion syndrome.
View all posts by csequoia →
This entry was posted in Uncategorized. Bookmark the permalink.